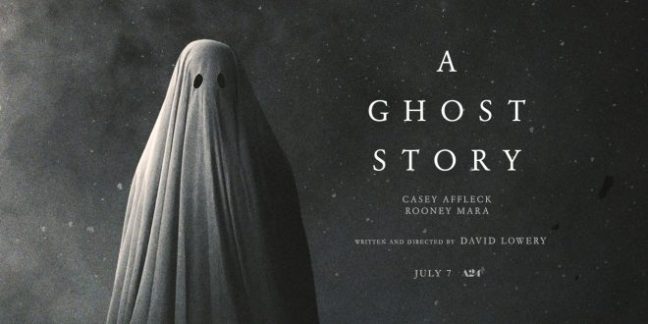 There are few things in this world I hold in greater disdain than stupid movies. I’m talking about the action-dependent, spectacle-driven, CGI-saturated, studio-spawned, soul-sapped, Frankenstein’s monster-type movies that dominate the summer cinemascape by pandering to the lowest common denominator. Movies like the upcoming Jurassic World: Fallen Kingdom and The Meg, which both already look more nauseating than a bucket of KFC chicken in a carnival Zipper and so thinly-written to have only used single-sided script paper.

A Ghost Story is the exact opposite of those sort of action-heavy movies. In fact, it’s so far in the opposite direction of those movies that there’s almost no action in it at all – not even simple actions like moving, talking, or facially expressing. That featured image heading my article? That’s a GIF!