The ultimate appeal of reading a Stephen King novel is not the coherent plots or the gruesome depictions of death that make the Red Wedding look tame or the bizarre ways their author manages to draw attention to a particular character’s penis – it’s the diction. King has a very folksy, down-to-Earth writing style, like a conversational old-timer who’s greeting a newcomer to town from behind the counter of a mom and pop shop. “That blue house up on I-95, past the old Shell station? Belonged to a friend of mine. Sergeant Perry Dewall. He was the town taxidermist after the war, ‘afore the Voices of the Forest told him to butcher his family and mount ‘em around his yard like a topiary garden. We lynched him without a trial and his vengeful spirit now haunts a Speak & Spell. Here, friend, let me light that for you…” His prose has a very familiar and welcoming quality that makes you feel like you’re being regaled by an old friend over a cold beer on the porch. In essence, he’s like Jud Crandall from Pet Sematary.

That is to say, he’s like Jud Crandall as written in the novel and not as portrayed here by a very bored-looking John Lithgow. Yes, this is one of those instances where I get to make like those legions of annoying Game of Thrones fans and tout a pompous “I read the book” hat as I inform everyone foolish enough to make eye contact with me just how little I cared for the creative liberties taken in adapting a beloved property. Granted, the book itself is plenty flawed, not to mention the relatively faithful but badly-dated 1989 version that is now somehow being hailed as a classic. Even if we set aside the divergences from the source material, this movie was altogether bad. Not terrible in the way that it makes you want to open your veins, not so appalling that you’d rather witness a brimming orphanage get napalmed, but just bad in the way that you check your watch and groan because there’s still an hour to go and the flask of J&B you smuggled into the theater was drained during the previews.

We open on the amiable Creed family as they take possession of their new acreage in rural Maine, which just happens to be kitty-cornered to an Indian burial ground with the power to bring the deceased back to life. The catch (no doubt scribed in the fine print by a disembodied monkey’s paw) is that those who are reanimated are bereft of all their former human goodness and will probably murder you with a pointy object at the first available opportunity. The plot is truly set in motion when the family cat, Church, is killed on the adjacent highway, and patriarch Louis is convinced by neighbor Jud that bringing the feline back from beyond the grave is preferable to having a frank discussion with his young daughter on the nature of death, or, you know, replacing the stupid cat with a new one. Even if they couldn’t find an exact duplicate, I’m sure we can all agree there were easier alternatives to resurrecting the bloody thing. 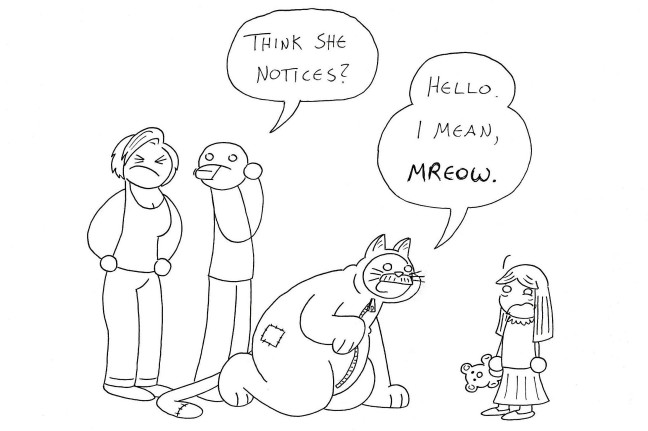 This, of course, speaks to one of the fundamental issues with the original story, which is that there’s no conceivable reason for Jud to ever take Louis to the burial grounds, considering he knew full well the disastrous consequences that would unfold if he did. While the novel (which King famously wrote with a coke spoon lodged in his nostril) vaguely alludes to some nameless evil that supposedly influences characters to unexplainable actions unawares, this movie makes no effort to patch such weak narrative links and simply lets them lie. In fact, it doesn’t appear that any effort was made by anybody on any level of the movie’s production, except where its plethora of shoehorned-in jump scares are concerned.

The cinematography is flat and boring, the script is listless and devoid of anything resembling momentum, and all opportunities for character development are squandered in favour of spotlighting ‘spooky’ imagery that isn’t connected to anything. While the emotional core of the novel is the father-son relationship between Jud Crandall and Louis Creed, here they share almost no individual scenes and seem largely wary of one another. Still, this is far more than can be said for the lack of chemistry between everyone else on screen, particularly Louis and his wife Rachel. I had to remind myself that they actually liked each other in the novel, because here they appear consistently irritated with one another or on the verge of exchanging blows. Also, though I rarely deign to belittle the labours of a child, I’m dead certain that the little girl cast as Ellie Creed studied at the Jake Lloyd Academy for Child Actors – and flunked. Finally, the revamped ending completely misses the point of the novel, which is that Louis ultimately fails to accept the reality of death or learn from his disastrous attempts to undo it. Instead, we are served a narratively empty, shock-value massacre that not only deviates from King’s thematically-appropriate climax, it inexplicably shifts away from Louis – you know, the main character. Imagine if they remade The Shining, but Jack successfully kills Wendy and Danny and the final scenes subsequently focus on Dick Hallorann poking around the Overlook trying to find a bathroom.

Say what you will about the 1989 version, but it at least felt like genuine effort was applied, especially when it came to honouring the book. This, on the other hand, feels like it was made with no prior knowledge of its ancestral publication other than a hastily-assembled checklist of narrative markers that needed to be hit at certain time stamps. With nothing flowing naturally from the performances and the inherent messages of the book being lost in translation, the movie has little else to offer viewers save for contrived attempts to scare, which is indicative of a larger problem besetting the modern horror movie. Take, for example, the Creed’s country home. In the novel (and even the original film) this is a green, spacious, picturesque location that any family would dream of raising their kids on (minus the bordering Death Race 2000 highway). Here, it’s a claustrophobic lot with gnarled trees and eerie shadows and unkempt growth and hidden fog machines scattered everywhere and a palpably evil atmosphere. You can practically smell the mildew in the air. Why would anyone willingly acquire such an ominous plot of land, you ask? Because the modern horror movie is compelled to instruct Joe and Jane Viewer with how to feel by way of ham-fisted visual prompts, as if it doesn’t trust them to be smart enough to know when to be scared without being directly told. Then again, the novel admittedly backends all the action into the final fifty pages, so perhaps some embellishments were justified – I just refuse to believe that anybody suffering from spinal meningitis could ever manage to fall down a dumbwaiter.

Just as the tagline advises that sometimes dead is better, I implore everyone to leave this lazy, obvious update undisturbed in its own eternal resting place – at the bottom of a Walmart discount bin alongside Rob Zombie’s Halloween and every superhero movie made between 2002 and 2008.