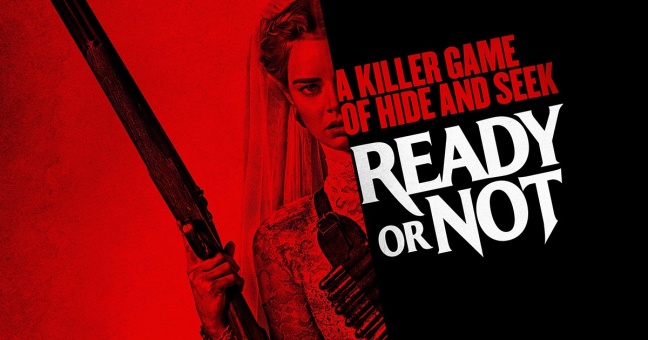 “Do you like playing games?” asks patriarchal board game magnate Tony Le Domas to his new daughter-in-law Grace in the stately family music room following the ceremony. “It depends on the game,” the bewildered bride replies, still begowned in her wedding dress and eager to ingratiate herself to her strange new in-laws, who are the sort of hyper-aristocratic, tradition-obsessed, monied WASPs who make a point to advise outsiders that they prefer the term ‘dominion’ over ‘dynasty.’ The game in question, it turns out, is determined by a mysterious puzzle box that was presented to family founder Victor Le Domas during the Civil War by an enigmatic benefactor named Justin Le Bail, who is casually implied to be Satan. Anyone marrying into House Le Domas must, by order of tradition, participate in the game chosen by the box, which might be as innocuous as checkers, as archaic as old maid, or as deadly as hide-and-seek. Grace, who was unaware of this little household custom before her nuptials, regrettably draws hide-and-seek.

If she can elude her murderous new relations until dawn, she’s an official member of the clan – not that it would remotely matter (see below). If not, Le Bail’s intermittent thirst for blood is satiated and the Le Domases may continue to be irresponsibly rich.

From a topical standpoint, Ready or Not carries the torch that was lit earlier in the season by Midsommar, in that it centers on an earnest but emotionally-vulnerable young woman who, through desperation for belonging combined with loyalty to an ultimately dunderheaded boyfriend, finds herself ensnared in an unfamiliar locale inhabited by bloodletting cultists. Aesthetically, it bears less similarities to Ari Aster’s gloriously oversaturated reimagining of The Wicker Man than it does to the 1985 alleged comedy that is Clue. Being set almost exclusively inside the shadowy colonial-era Le Domas manor, the camera offers up eye candy in the forms of taxidermized animal trophies, heirloom weapons, labyrinthine secret passageways, stern-faced portraits, marble busts, and a dumbwaiter more lethal than the one in 2019’s Pet Sematary (spit). Tonally, it rests at the center of a Venn diagram where a variety of genres and themes intersect – in addition to being a blood-filled schlock action film, a nod to exploitational predator/prey-style narratives, an homage to 1980’s B-movies, and a tongue-in-cheek escalation of the ‘in-law’ dramedy subgenre from the early 2000’s (Meet the Parents, My Big Fat Greek Wedding, etc.), it also functions as a satirical indictment of modern class systems, the evils of capitalism, and the destructive whims of the One Percent. All analysis aside, it’s also a rollicking good time – the script is funny and self-aware, the performances are memorable and energetic, and the plot manages to please by hitting all the obligatory checkboxes you’d expect in a film of this caliber as well as offer up a few welcome surprises, which mostly stem from the directions the story didn’t take.

As my anticipation mounted throughout the summer for Ready or Not’s release, I developed a number of presuppositions based on tried-and-true genre hallmarks, all of which turned out to be inaccurate. Based on the previews, premise, and promotional stills, I’d envisioned the hapless bride spending the first half of the film narrowly dodging crossbow bolts and shotgun shells before an inner strength-mustering midpoint in which she’d say enough is enough, arm herself to the teeth, pose for a glamorous toe-to-head trailer-shot, kick a few doors down, and proceed to dispatch her assailants one-by-one like John Rambo in First Blood – if he actually intentionally killed anyone, that is. Thankfully, the actual sequence of events turned out to be more subversive and interesting that what I’d been expecting.

In what could very well prove to be her breakout performance (which arguably might have been in 2017’s Mayhem had anyone bothered to see it), Samara Weaving counterbalances the helplessness of Grace’s plight with equal parts deadpan humour, wry side-commentary, anguished resilience, gritty realism, and the greatest laugh since Arya Stark upon hearing that Auntie Lysa died. As her situation intensifies and her injuries accumulate, she transitions from disbelief to shock to terror to despair to survival-mode to primal self-defense to zero-f*cks-given with award-winning precision. That being said, she does not develop into a bad-ass G.I. Jane nor does she end the film standing atop a pile of bodies with a shotgun slung over her shoulder and a stogie wedged between her teeth – in fact, her defining moment of awesome comes when she merely rejects both her new husband and his family in possibly the most realistic reaction a person would have in such horrific circumstances. This sense of realism also extends to the Le Domases themselves, who are not revealed to be the same sort of cold-blooded, highly-efficient sociopaths as Get Out’s equally milk-white Armitage family. Truth be told, both their dysfunctionality and their overall competence is matched by that of Arrested Development’s Bluth clan, in that their sole interest beyond the continuation of their lifestyle is self-preservation. Apparently, a caveat of the hide-and-seek scenario as dictated by ol’ Justin Le Bail is that unless the would-be Le Domas is found and ritualistically slain by sunrise, death will befall the entire family. The Le Domases have so little desire to shed blood that they barely know how to use the weapons in their arsenal – shells and arrows frequently miss their mark (unless they’re aimed at the help) and some of the family members receive as much of our sympathy as Grace herself. They inherited Le Bail’s curse along with their ancestors’ fortune, and now they’re forced to make do.

In all, The Most Dangerous Game (In-Law Edition) is jolly good fun and manages to subvert expectations while still delivering on its promise of wanton violence and the sort of inventive kills that invoke the spirit of 1980’s slashers. Considering that the similarly-themed Universal production The Hunt riled up so much controversy in the White House that it got pulled from the domestic release schedule, it’s a curiosity that this was even released at all. Like Grace herself, perhaps it just managed to win the game.