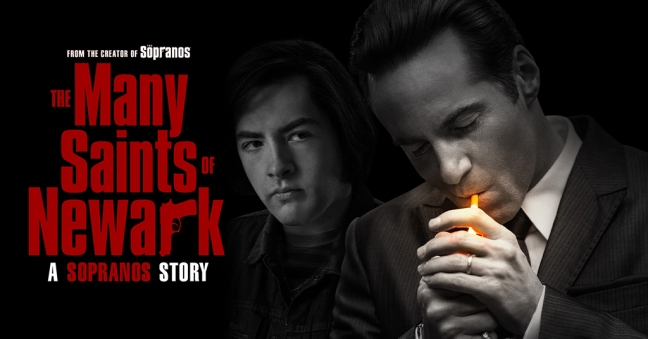 Not to be overly critical right off the bat, but I haven’t felt this unhappy leaving a theater since Rogue One: A Star Wars Story (another unnecessary origin tale with a studio-applied subtitle denoting its parent franchise, presumably so casual moviegoers know which brand is spoon-feeding them).

The Many Saints of Newark is a standalone prequel to The Sopranos, HBO’s Emmy-collecting crime drama series that reshaped the television landscape back in the early 2000s, ushering in a new era of prestige TV that gave us Breaking Bad, Mad Men, and Game of Thrones. For six (and-a-half) seasons, we watched as New Jersey mob boss Tony Soprano balanced his criminal and domestic commitments, unravelled his anxieties and mommy issues in therapy, and navigated America’s shifting cultural climate with all the grace and poise of a self-indulgent, sociopathic rage monster (well, I personally tuned in later, being all of nine when the series first premiered). To this day, it deservedly tops most Best Television Series Ever lists (including my own), and has been the subject of intense speculation over its cryptic finale by both fans and critics, who have spent the intervening years hounding series creator David Chase for more. Now, nearly fifteen years after the infamous Cut to Black, Many Saints purports to examine how the most emotionally intelligent Mafia don we’ll ever meet came to be, told from the perspective of one Dickie Maltisanti (the father of Tony’s hotheaded nephew-in-law and protégé Chris, mentioned occasionally in the series as having been an influential figure in Tony’s life).

As is the case with most prequels, the past was better left undisturbed.

Be forewarned — spoilers abound in plenteousness.

We’re introduced to the less-than-saintly Dickie (Alessandro Nivola) in Newark in the late 1960’s, just as racial tensions are about to boil over into a series of historic riots that will impact all of America. The plot ostensibly chronicles his attempts to do right by an adolescent Tony, who, aside from the occasional stolen answer sheet and ice cream truck hijacking, is mostly a good kid at this point in his life (though what point that is age-wise is unclear). Grooming the future crime boss for leadership will have to wait, though, because Dickie’s got his hands full dealing with his violent father (the legendary Ray Liotta) and engaging in an illicit affair with his beautiful new Italian step-mom, who somehow shares more scenes with Dickie than Tony. Dickie also carves out time to visit his uncle Sally (Ray Liotta in a dual role), who is for some reason serving a life sentence for the unsanctioned murder of a made man instead of occupying a dozen different landfills. As if this wasn’t enough, he’s also attempting to bring his son Chris into the world, set up his comare with a beauty salon, enjoy a fulfilling life of crime, and support Livia Soprano (Vera Farmiga) and the kids while patriarch Johnny (here played by cinematic bro Jon Bernthal) visits a federal resort. Oh, and there’s also some drama with a former associate (Leslie Odom Jr.) starting a rival gang and seducing his mistress, resulting in an interracial gang war that pops up for a couple three scenes before being forgotten. We also occasionally see young Paulie Walnuts. And young Pussy Bonpensiero. And a young Uncle Junior. And an inexplicably middle-aged Silvio Dante, which means he’s pushing seventy at the start of the series, despite having grown up with Tony. And a newborn Chris, because timelines are apparently made to be broken. And let’s not forget Tony Soprano himself, who is also in this movie from time to time (though he’s only played by Michael Gandolfini for the back hour).

There’s a hell of a lot going on here, so much so that it feels like ten episodes’ worth of material compressed into a two-hour highlights compilation on YouTube. Underdeveloped subplots and various unconnected scenes vie for dominance, pulling the plot in so many different directions you often lose track of who’s who, what’s what, and why any of it matters. This is especially frustrating because many of the movie’s individual scenes are well structured, smartly written, and superbly acted, particularly the ones featuring Nivola and Liotta in the prison parloir and Farmiga and Gandolfini squaring off in the family kitchen. The problem is these scenes are all virtually unrelated to one another, as if the movie took the Mafia soldier’s capacity for compartmentalization to heart. After two hours of routine narrative check-ins, so little of what we see ends up having any definitive impact on the abrupt and altogether anticlimactic ending that I’m left wondering why this story was even told in the first place.

Granted, the decision to focus Many Saints on Chris’ long-deceased father was an interesting approach, one that should have given us a fresh new insight into characters we’re already intimately familiar with by way of a character who’s unknown to us. Unfortunately, it’s a little difficult for us to care about the man Who Made Tony Soprano when the movie clearly doesn’t. Dickie’s otherwise intriguing desire to perform a good deed to compensate for a lifetime of sins is completely lost amidst endless callbacks to the series, emphasis on standalone scenes, and enough meandering plot threads to satisfy three different movies. Because there’s no focus, the moments that should hit the hardest fall completely flat and leave you wondering if you either missed something or if Chase jumped the gun delivering payoffs without bothering to set them up beforehand. The tertiary characters feel like tired clichés and the stellar main cast is almost completely wasted, which is a damn shame because I was really looking forward to seeing Corey Stoll as young Uncle Junior, Jon Bernthal as a reimagined Johnny Boy Soprano, and Billy Magnuson as young Paulie Walnuts (their performances are still great, but their apprearances are fleeting and their scenes lack context).

Besides The Godfather Part II (which is admittedly only half a prequel), I’m not sure there has ever been a prequel that has justified its own existence. Perhaps with a more focused script, some serious narrative fat-trimming, and more respect for the series’ established continuity, I wouldn’t feel so let down. As it stands, The Many Saints of Newark is less like Tony Soprano and more like his future offspring A.J. — a lazy, unfocused waste of potential.

NOTE — Okay, I will admit that Better Call Saul, the prequel series to Breaking Bad, has thus far succeeded in answering my initial question “Why should I care how Jimmy McGill becomes Saul Goodman?” with seven simple words: ‘Gus-Mike-Chuck-Kim-Howard-Nacho-Lalo.’