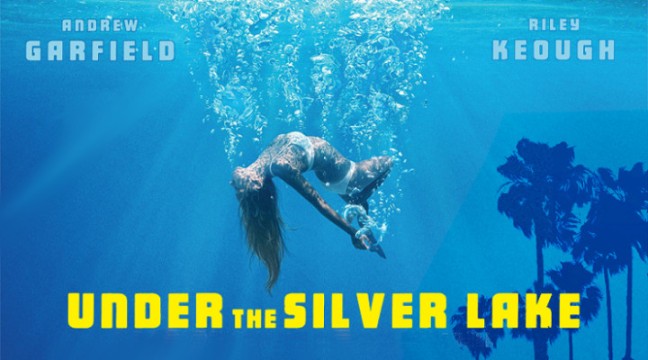 It’s a sad indictment of the collective temperament of the human race that those in the public eye are often remembered best not for their triumphs and achievements, but for their blunders and missteps. Where directors and writers are concerned, oftentimes the most calamitous of these blunders and missteps have directly followed the greatest of their triumphs or achievements. Michael Cimino won Best Director in 1979 for The Deer Hunter, which he immediately followed up with 1980’s Heaven’s Gate, a disasterpiece that by all accounts ruined the industry for everybody. Kevin Smith defined slacker culture with Clerks in 1994, which he has since been following up with everything else in the View Askewniverse, which is apparently a thing that people take seriously. Robert David Mitchell was lauded in 2015 for his Indie horror flick slash cautionary tale about sexually transmitted diseases It Follows, and has now followed it up with Under the Silver Lake, a movie that admittedly might have been good had a modicum of restraint been exercised at any point in the editing process.

Critical reaction towards Under the Silver Lake has been divided since its screening at Cannes last May, with some reviewers heralding it as visionary and ambitious and others dismissing it as bloated and unengaging. Disappointed as I was with the movie, I admit I found it to be more of a misstep than an outright blunder, which still hit hard considering the mind behind it. Until this point Mitchell had been showing such promise as a filmmaker, given that he made one of the most effective and well-executed horror films of the past decade (though the jury is admittedly still out on whether that swimming pool sequence made any sense). Unfortunately, his sole guiding principle with his latest venture seems to have been little more than “If I want it in, it’s going in,” because there is so much packed in here that distracts from the basic plot that you’re barely able to remember what direction the movie was pointing. It’s possible that Mitchell simply got carried away with the biggest budget he’s ever had at his disposal or that he just couldn’t bring himself to kill his darlings. Either way, it seems he fell victim to the seductive susurrations of his shoulder-George Lucas – an impish spirit who tempts directors to accept every idea that pops into their heads as cinematic gold regardless of their relevancy to the plot or how they might negatively impact the runtime. 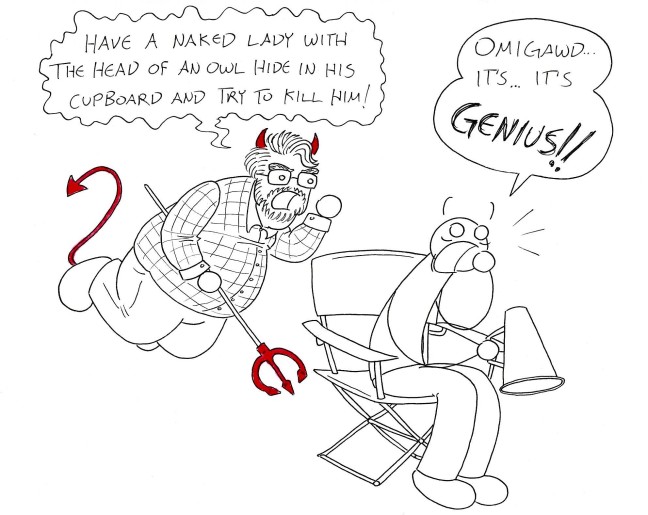 Let’s dive in – Andrew Garfield stars as an aimless, unemployed, sex-fiend-in-the-making named Sam who lives in Los Angeles during what I’ve gathered to be a paradoxical mashup of 1980’s pop culture and 2010’s technology. The only thing that interests him more than convoluted conspiracy theories or ferreting out subliminal messages from rock music lyrics is his beautiful new neighbor Sarah (Riley Keough). Unfortunately for him, she vanishes from his life just as suddenly as she appeared, leaving naught but an empty apartment with cryptic symbols scrawled on the walls and a forgotten shoebox filled with odds and ends. Sam is convinced that shady dealings are afoot and sets out to uncover her fate, which is where the movie completely loses itself in a cornucopia of largely extraneous nonsense. While the central thread of a mystery is traceable throughout the movie, it’s only one of many – others involve a supposed canine serial killer, an arcane zine that apparently foreshadows the events of the plot, a wizened songwriter who allegedly wrote every Top 40 Hit since the advent of music, and – yes – a naked lady with the head of an owl who hides in Sam’s cupboard and attempts to kill him.

The problem with Under the Silver Lake isn’t its outlandishness or that there’s far too much going on, it’s that there’s far too much going on that doesn’t have anything to do with the core narrative. A story about a socially maladjusted schmuck on the verge of homelessness trying to locate his beautiful neighbor is actually a fun idea – I know this because all the scenes directly involving Sam’s haphazard search for answers are the best the movie has to offer. Even the outcome of his efforts feels completely natural for his character – having decided to let Sarah go, Sam returns to his empty life and his impending eviction notice, but finds some small comfort in the bed of another much-older neighbor with an extremely liberal stance on public nudity. The heart of the movie is strong – it’s just stifled by superfluous weirdness, easily-extractable side material, and no less than three scenes dedicated to Andrew Garfield’s butt. I personally feel like I don’t need to see Andrew Garfield’s butt in a movie – but only because I live next door to Andrew Garfield.

Though Mitchell’s direction is on-point and his ability to craft a tone through atmosphere alone is as masterful as ever, Under the Silver Lake ultimately suffers from trying to pile too much on its plate. It feels like It Follows, looks like something directed by Shane Black, and strives very, very hard to be The Big Lebowski but falls miles short. Mitchell clearly set out to create a stylish, sexy neo-noir without realizing that all a noir’s narrative threads must interconnect before tying off in a conclusion that lays everything to rest. By the time the credits roll here, the majority of the supporting threads only fray and fan out in completely different directions – the ones that aren’t completely forgotten, that is. The end result is a two-and-a-half-hour saunter through the park that could have been a taut hour-and-a-half sprint had the decision been made to trim the copious amounts of narrative fat off an otherwise lean entrée. There is a good film lurking in here – the pieces are all present, it’s just a damn shame they weren’t given room to breathe.

In close, I wanted very badly to love this movie, and perhaps if Mitchell ever releases a post-Cannes edit that sheds the dead-weight and brings the core story into focus, on that day I will revisit and enjoy it. Until then, I’m left lamenting for the film that could have been. Half-heartedly,